Start page | Paws in art | Better be barepawed | Comic strip | List of freepawers
New Telegram group installed 2016! If you have the Telegram messenger installed on your mobile phone, you can use the following link to join:
https://telegram.me/joinchat/AJ-e0ANdv-39Tik8pDs-Sw 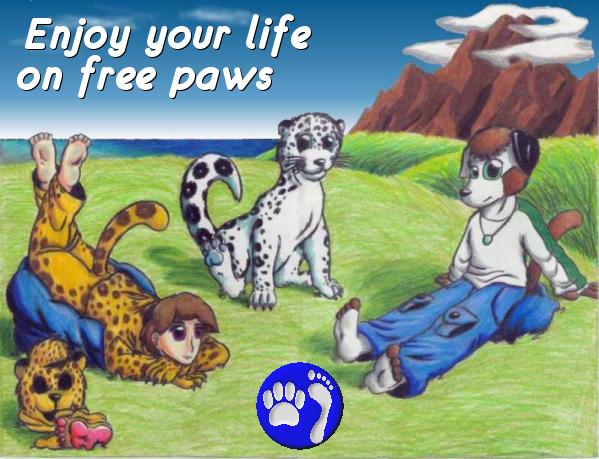 This page is dedicated to all who consider bare paws a part of furry lifestyle.

Furries are non-human animals in art and literature, anthropomorphized or not, who have assumed some part of culture (as humans have it), such as speech, the use of tools and technology or living in houses and cities. Some furries are wearing clothes - from some basic covering sensitive zones or rain protection to full clothing covering all or most of their bodies, similar to what humans wear or different. Others consider them useless, or mostly so, as they are well enough protected by their fur. However, it is only a small minority among the furries who wear shoes - most furry characters that you can see in furry artwork, read about in stories or meet in MUCKs go barefoot (or bare-pawed, as a more appropriate term). Head, tail and four paws (handpaws/forepaws and footpaws/hindpaws) are the spots traditionally left exposed on most furries.

Why most furries go barepawed

Some hints for artists and those who play furries ....

Many furry fans have `personal furry' characters, which represent their personality, and try to take some of their furry lifestyle into reality. As you see above, going barefoot is a part of this furry lifestyle - so don't be surprised if you meet furries in reality, and notice that they wear nothing on their footpaws.

Why don't you try it yourself? You will see that human feet are just as good for many surroundings (especially natural ground, such as grass, forest floor or sand) as furry paws are - that shoes are not always necessary, and that you will feel your environment much better if you leave them away. Just pad around with direct ground connection as nature intended and imagine you were your furry character .... You will find it both enjoyable and healthy.

The easiest place to start is your own home. Just leave shoes and socks behind whenever you enter your door, forget about slippers, pad around barepawed year-round, it's easy! If you tend to get cold feet on stone or tile floor, put a rug on the floor where you normally sit or stand. The ability to wiggle toes freely can actually keep your footpaws warmer than if you covered them. For furry indoors gatherings, bare paws are an obvious choice for quite a number of reasons.

Of course, don't stop there! Go out and explore how the surfaces there are to the touch underfoot. Start with short barepawed walks on comfortable ground such as grass or sand. Actually a beach holiday is a great chance for an easy start as the sand gives good muscle training. Gradually extend your range by trying new grounds and going on longer walks. Be safe by always watching the ground ahead and stepping softly, straight down, without shuffling your feet over the ground. Be cautious when you can't see the ground clearly due to darkness or obstacles such as tall grass, leaves or snow, so you don't accidentally step on something spiky.

Too cold? Too hot?

If you go barepawed outdoors regularly, you will increase circulation in your feet, so you won't get cold feet that easily anymore, even when the weather is cool. For you arctic furries, you may want to try padding around barepawed in snow for an especially refreshing experience, but be aware of your personal temperature limit so you don't freeze your toes! So come back indoors after making a few hundred pawprints before your toes go numb and enjoy warm paws the whole day long! If temperatures are above freezing, it's safe to go out - you may compensate for the loss of warmth through your paws by adding another layer of clothing. Many experienced barepawers will get a cold nose before they get cold toes!

Some furries live in very hot areas. There it's advisable to avoid dark asphalt which can become hot like a frying pan. Seek the shadows, go out in dusk and dawn, look for grassy strips to cool down. Or do it like those desert lizards and lift up your foot to cool it in the wind.

Taking care of your paws

Paws need little maintenance, small injuries heal remarkably fast, and best of all, they actually grow thicker skin when walking on rough ground long enough. However, many tend to have dry skin on their paws, which develops cracks when it grows (especially on the heels) - this can hurt if not treated right. To prevent this, use fine sandpaper or an emory board to keep the surface nicely smooth, and apply cream to keep the skin moist and flexible. If foreign objects such as thorns or bits of broken glass have entered the skin (it happens rarely), pull them out completely before they are pushed in further. For your longer trips, it's advisable to take tweezers and band-aids with you so that small injuries don't hold you up.

In city and nature

Some furries live in the forests and savannahs, others in the cities. Be well prepared for obstacles you may encounter, but rest assured that your paws will conquer your surroundings with ease. In nature, you may find thorny bushes, thistles and such - keep to areas where you can see the ground easily to avoid these. Being a true furry means to be aware of your surroundings and reacting accordingly - even if it means to change your trail from what you originally intended.

The city mostly has hard, flat ground of varying roughness for you. Exhausting for long walks, but less so if you are bare-pawed. In dry weather, city dirt will turn your pads to a dusty gray or almost black. Some city furs even enjoy it when their pads stand out like this. It will wear off in grass and puddles, or can be cleaned with water, soap and a brush in the shower. Watch out for tiny bits of broken glass - even though a tough paw withstands most of them, better don't push your luck. Sometimes a grassy strip next to the sidewalk allows some variation - or try passing through a park and crossing the lawns for softer surfaces. But even the streets can be highly enjoyable, so that you may not need shoes at all when going to the city.

Once you conditioned your paws for the various sorts of ground you may find, try exploring the nature nearby, alone or with other furries. Leave the trails to find your way through the underbrush of the forest - now you are a native animal too, behave like part of the local wildlife. As you can move more silently than those wearing shoes, you can get closer to wild animals to watch them.

Climb on trees or rocks, which is much easier if your toes can grab the surface. Some barepawed furries can climb vertical poles without any footholds! Just make sure you can safely climb down again without falling.

Splash through puddles and mud in rainy weather - paws are waterproof!

Lawns and meadows are a pleasure for all paws. They make walking easy, for hours and hours without wearing you out - if you find such a long grassy trail! But watch out for thistles in dry meadows, and avoid flowering clover in the sun as bee stings can be painful.

Leave pawprints on soft ground such as sand, mud or snow, or with wet paws on dry streets. Try walking digitigrade for a while, heels not touching the ground, leaving digitigrade pawprints.

And of course, it goes without saying, all kind of cuddling, a definitely furry thing, is best done bare-pawed! Experience yourself that a footpaw can be just as gentle as a handpaw for stroking and scritching.

Even when it's cold and snowy, furries can have freepawed fun - and not just furries .... try it! For a few minutes, a barepawed snowball fight can both refresh and warm you up! 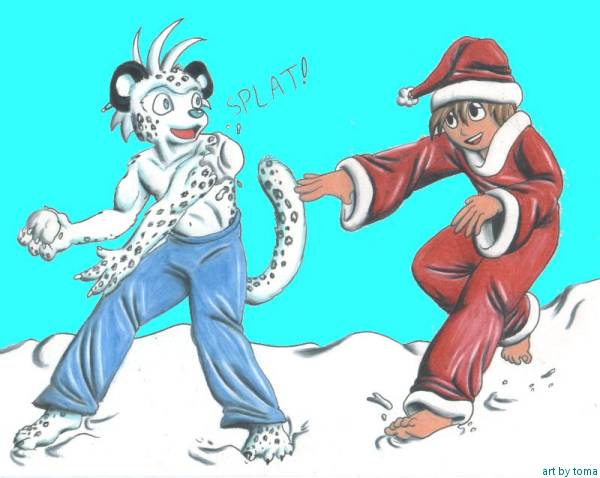 The WWW-based discussion board at www.wuffpaws.com for all barepawed furries and furry paw fans! Come and contribute!

For those of you who have Yahoo IDs, this is a new forum to discuss and share files, affiliated with this site. It's open even to all, no matter whether you are listed here.

Due to the abundance of furry pages on the WWW, I just give some links to furry link-pages of others - saves me the trouble of keeping them all updated. :)

These links mostly go to non-furry barefoot lifestyle sites, which seem to exist in a number of countries. I hope to give you a couple good surfing startpoints here as there is no well-organized linkpage.

See also links inside text. Mail meif you know of other sites of general interest for furry barepawers - thanks!

Read here about the furry peace movement, and show your support if you want the furries to remain a peaceful community.This page is maintained by unci. Last update in July 2000. Additional art by MouseHouse.