Styles of paws in furry art

A lot of different styles for paws exist in furry art. The range goes from true digitigrade animal paws to almost-human feet (with toenails and furless soles), and there are a lot of nice styles inbetween. This page discusses some of the decisions that a furry artist or player has to make, and shows some examples on how to draw paws. Keep in mind that paws are an important way of expressing a furry's personality, mood and species.

The first thing to decide when drawing (or designing a furry character concept) would be the leg shape. Digitigrade legs have their heels off the ground, which has an effect for the entire leg - it usually cannot be stretched out, the whole character has a more dynamic position and would probably have trouble keeping balance when standing still on two legs. Plantigrade legs can be quite humanoid in proportions, so they can be stretched out totally, leading to a completely upright standing position.

When drawing digitigrade paws, take into account that these have to carry the whole weight if the furry is on two legs, so draw them bigger than they would be if the furry was on four legs. It is also important to find the right "balance": when standing, the center of gravity should be vertically above the paws. The picture compares digitigrade and plantigrade legs, you can see the "line of gravity" on the digitigrade furry. 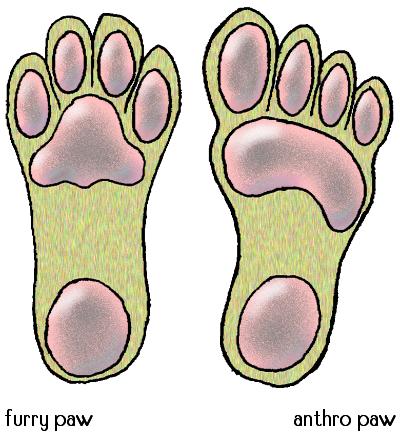 Toes: how many, which shape?

Many artists give their furries the same number of toes as the corresponding animal would have in real life. Some, especially those with a more "toonish" style, reduce the number of toes to three; others (those with a highly anthropomorphic style) give all furries five toes, regardless of species.

The front part of the foot can be rounded like a furry paw or have a pronounced big toe as humans have it (or anything inbetween). The picture shows two different plantigrade paws with pads - the one on the left (symmetric) is based on a feline paw, with the addition of a heel pad; the one on the right is more anthropomorphic in shape, with a big toe as humans have them (but only four toes). As often in furry art, this paw is wider and shorter than human feet would usually be.

Some artists give their furries realistic claws (for example, strong fixed claws for canine species, sharp retractible claws for felines). The claws of felines are usually retracted unless in use (when holding on to something, climbing, stretching, scratching, attacking). In that case, the clawsheaths on the toetips are visible, perhaps with a bit of the clawtips. Toonish paws often have no visible claws at all (or claws only if they are in use, as a form of expression, but normally completely invisible). A few artists even give their furries humanoid toenails - this usually in combination with the aforementioned "big toe" configuration.

The picture on the right compares two digitigrade paws - on the left (feline), the claws are retracted (the clawsheaths appear as vertical lines on the toes); the right has nonretractable claws and might belong to a cheetah or canine.

Furry paws often, but not always, have pads of tough, furless skin, giving them good traction and optimal sensitivity. Each toe has an oval pad, the center of a digitigrade paw is formed by a big pawpad which is differently shaped, according to the species. If a furry artist draws a plantigrade footpaw which looks like a digitigrade paw in front, usually a heel pad is added (as that carries a good part of the weight in plantigrade paws). Some artists however omit the heel pad, so that the furry "walks on fur" (often such paws are semi-digitigrade: walking digitigrade, but using heels for support when standing). See Akai's example below for one way to do it. (By the way, furries who walk barefoot a lot in real life will experience that their feet develop pronounced pads, including the heelpad, much like a furry paw!)

Another approach is to omit the pads and give the paws a smooth surface with the same colour of the rest of the fur. See Toma's example of "plush paws" below.

Some artists give their furries completely furless soles, without pronounced pads - this is again a sign of high anthropomorphism. The picture on the right (by MouseHouse) shows an example of this style.

Depending on the species, you can either add a lot of fur (for species adapted to coldness, such as polar bears or snow leopards) especially around and between the toes, or have rather sparsly furred paws (as many rodents have them).

The paws of many four-legged species are not very well suited for holding objects. So, a two-legged furry usually has more "hand-shaped" paws to be able to grab objects. A number of species already have the right paw shape for this.

Fingers - how many, how long?

Another tendency for furry handpaws is to make the fingers shorter than human fingers would be. For cats especially, it has to be like this if the fingerclaws should still be retractable.

Usually the configuration of claws and pads is the same on the forepaws and hindpaws of a given furry - though the pads on the handpaw fingers of exclusively two-legged furries are usually not as tough, as they are not walking on them.

How to draw a furry footpaw - by Akai

Akai compares in this drawing the plantigrade footpaw of an anthro-canine to a human foot. As a help for drawing, the foot is divided into ovoid volumes for the heel, the ball and the toes (which are corresponding to the pads on the furry paw). You can see the difference in proportions: the toes of the furry paw are bigger and all of about the same size. 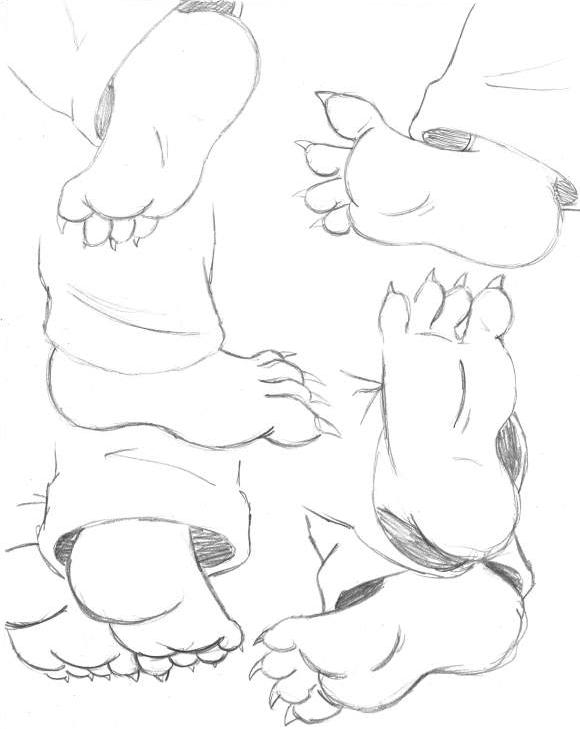 Toma shows us numerous angles on his style of four-toed, clawed "plush paws" in this drawing - they are called "plush paws" as they don't have pronounced pads. You can see the slight asymmetry (the difference between left and right feet can clearly be seen), the slight wrinkles on the soles and the expressivity of spreading toes.

Return to the Free Paws page.